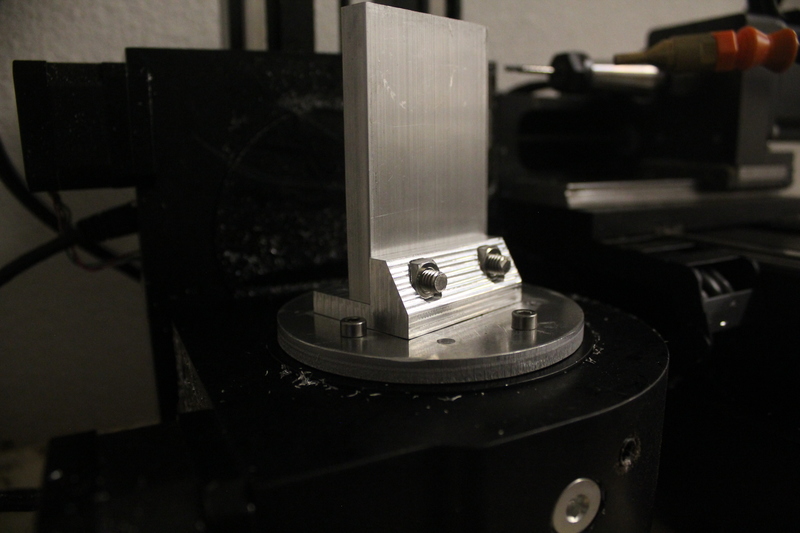 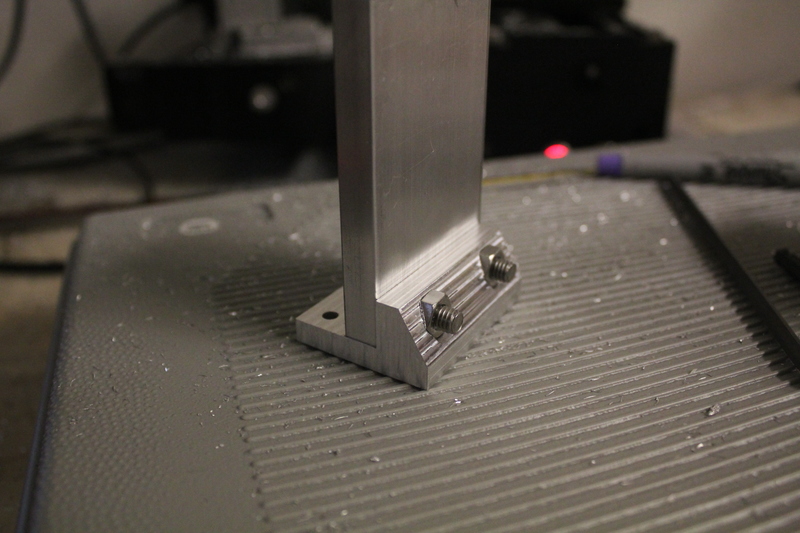 I had most of the part already machined out the night before, so all I needed to do was poke a few holes for the locating pins and cut it off the stand. For the holes, I used the 1/8" endmill I used to do the rest of the part with and did a pecking drill operation. I really shouldn't have done it with an endmill as it made the hole quite a bit wider than I wanted, and there is a bit too much wiggle room for my liking. If I thought about it, it makes sense, since endmills have side cutting capabilities, any kind of vibration would cut into the walls of the cylinder, whereas a drill bit would only cut down.

After milling out the holes, I then moved over to parting the piece off the base of the stock. This was much easier than I thought it was going to be, I created a sketch on the face of the side I wanted to mill from and made a rectangle in which I could restrict the path of the endmill. I then used an adaptive clearing to remove the material from underneath. Unfortunately, about halfway through the cutting operation, I forgot the stock wasn't perfectly square in the clamp, which caused the endmill to dive into 1/6" of aluminum thinking it was air; this flipped the stock partway out of the clamp. I did get it on camera, and you can almost hear me jump when it happens.

Thankfully I was able just to loosen the clamp a bit and get it back in place, and after that, it was pretty uneventful. I came in from the four different faces and cut each about 0.8" down then for the last operation left about 0.05," which I would cut off manually. I did this rather than having the endmill cut it all the way off in case the part fell and scraped up the finish on the piece.

I noticed that the holes for the set screw and pins didn't go all the way through the bottom of the part, so I took it over to the drill press and finished the job. I then used the small files I picked up last week to deburr the edges and clean off the bottom, where I parted it off the base.

I then took a piece of bar stock I had that this project was based around and drilled two 0.25" holes on the drill press to match the holes on the new clamp. Since the clamp screws I'd be using are smaller than the 0.25" holes, I had no problem aligning them appropriately to fit. After tightening the clamp screws, it was not going anywhere, super stable!

Since I also now have the new bed/disk that came in today, I removed the old clamp and installed it. It fit perfectly, and I only need to machine a few features on it before its ready for the part I just finished! I just rested the new clamp on the table to see how it would look in its final state. 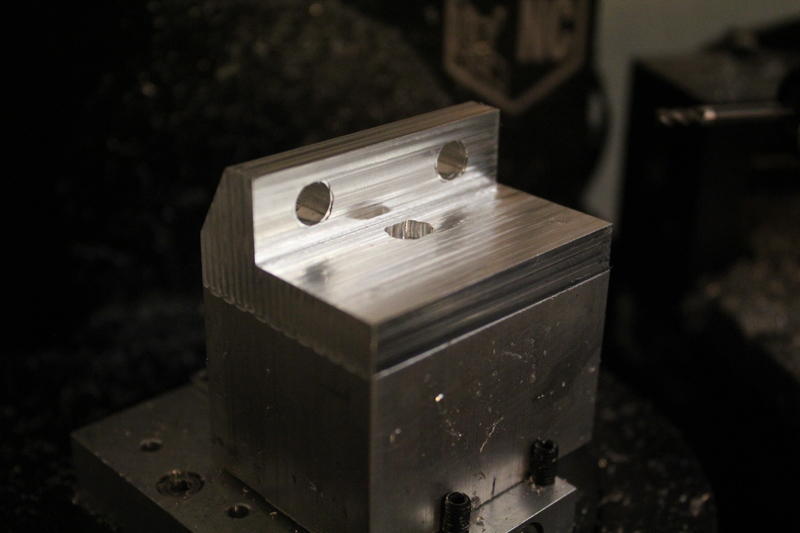 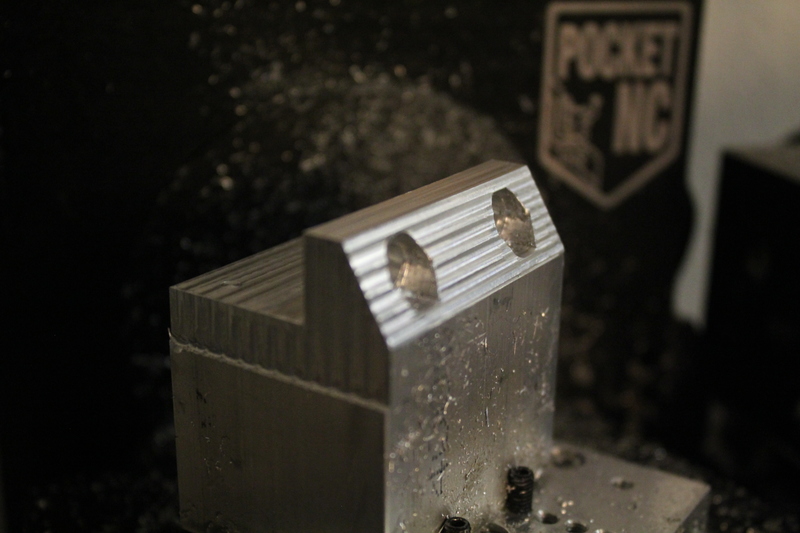 After coming up with the new clamp design last week (see previous posts), I finally got around to machining it. Not going to lie, I was a little bit dreading since my last aluminum project failed.

I designed the clamp fixture to match some 6061 stock I had already to make it easier on myself. I decided to use the recommended speeds and feeds for cutting aluminum by Pocket NC, and it seemed to work pretty well though a bit slow. I'm using a three flute 1/8" square endmill at approx 20 IPM. The local machinist was giving me some tips on machining it and told me to move the endmill farther into the tool holder; he said you only want it 0.01" more than what your most extended depth is to get the most rigidity out of it. That alone improved the sound of the milling by quite a bit.

I was also looking into coolant systems for the Pocket NC and asked around one of the Facebook groups, where I heard someone using it and ruining one of the belts in the table/bed. The machinist suggested I use coolant, even a light misting every hour would make a world of difference; however, after talking to the people at Pocket NC, they urged me not to. However, midway through the operation, when I was sending a few videos of it running to the machinist, he suggested I try coconut oil on a brush and lightly dab the part about to be milled, just a drop or two. I tried it and holy smokes; it improved the sound tremendously, and I even cracked the feed rate up by 20% without any change in noise.

After doing a 3D adaptive, I did a few pocket clearing and facing operations to cut the holes and clean the sides. I, unfortunately, I wasn't able to finish it due to time restrictions, but I will pick up where I left off tomorrow. Overall very pleased with the outcome thus far. 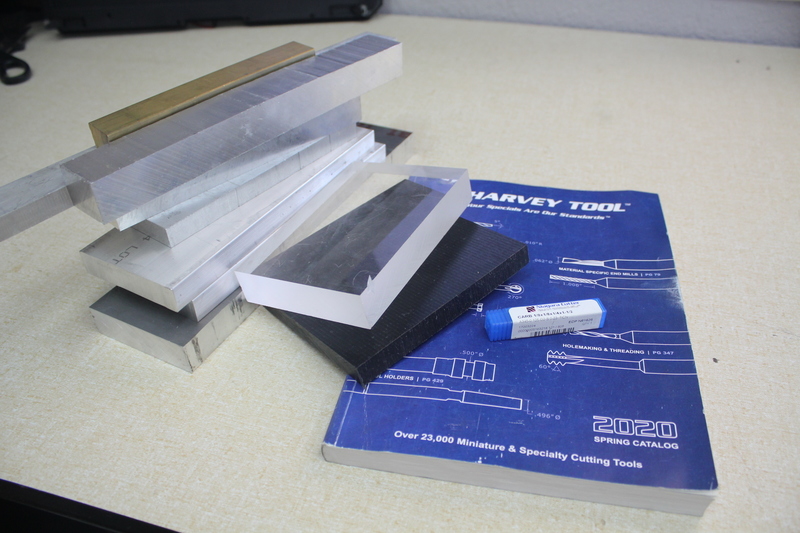 While I was out today, I also stopped by a local machine shop to discuss better ways of milling out small parts, primarily the pendant that I worked on a couple of weeks ago.

He suggested that instead of having the two pegs for the part to stand on, it would have better rigidity to have a thin flap of metal surrounding the piece. It would also help with cutting the pendant loose; for my system, I would simultaneously cut off the part and finish the face, which was quite difficult and left a bunch of imperfections I couldn't remove later. He also suggested using putty to fill in the first side milled out; this would prevent vibrations, which could cause a bad surface finish. You can see in the images of how he milled out similar parts. 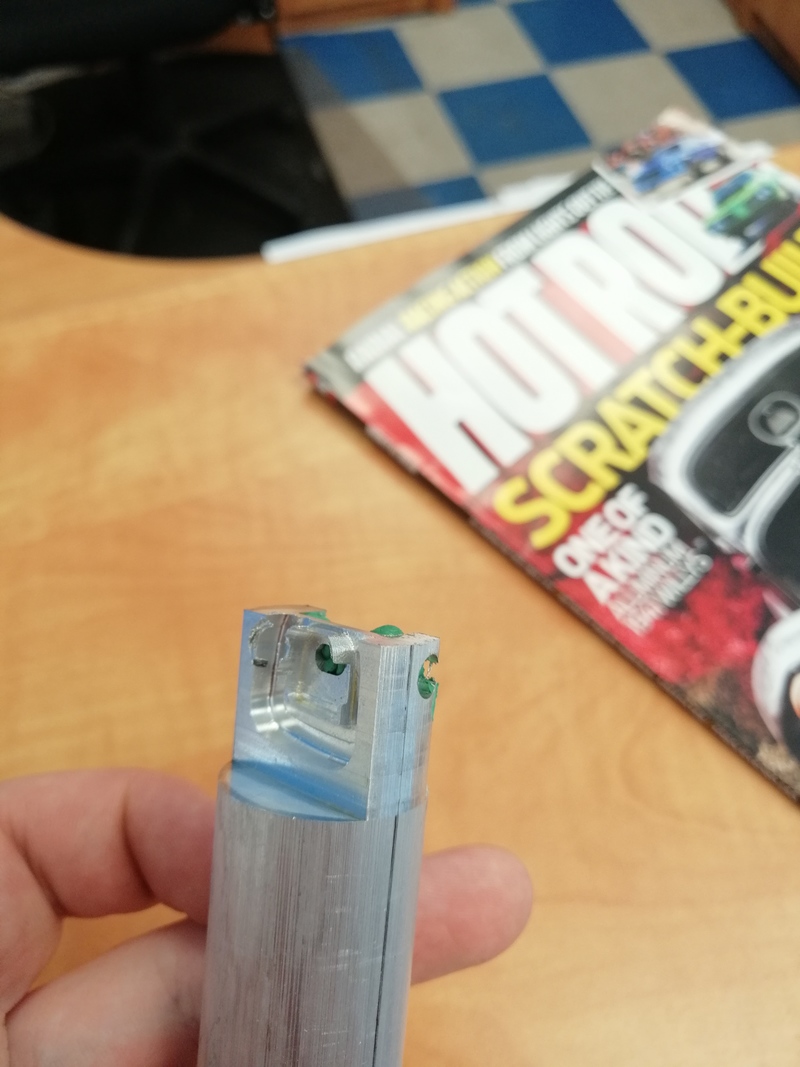 In addition to all this, he mentioned that it would be easier to get the side's filleted with a square endmill vs. a ball endmill. The reasoning behind this was you would need the ball endmill to reach farther down past the part and would interrupt the metal flap around the piece. I initially thought he meant to do step-downs with the square endmill, which would leave steps on the finished part, but rather mill it to flow over the sides.

Another great piece of advice he gave me was for the tooling itself. He was saying that you only want as much flute length as you're going to use, and any more than that would be pointless and give you less tool rigidity. I've heard this from Saunders and a few other people as well but forgot it when ordering the new endmills. He also gave me a Harvey tool catalog which he said would explain the purposes behind coating and the best endmills for the material being used.

After giving me this very much needed advice, he gave me a bunch of new stock I could use to mill. Mostly 6061 aluminum but also a bar of 7071, and aluminum & bronze compound, some more acrylic, and black material that I forget the name of but reminds me of micarta. 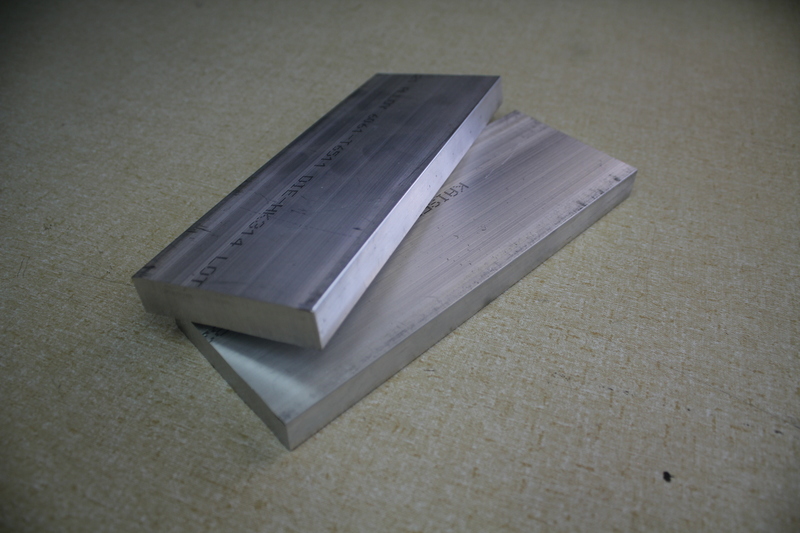 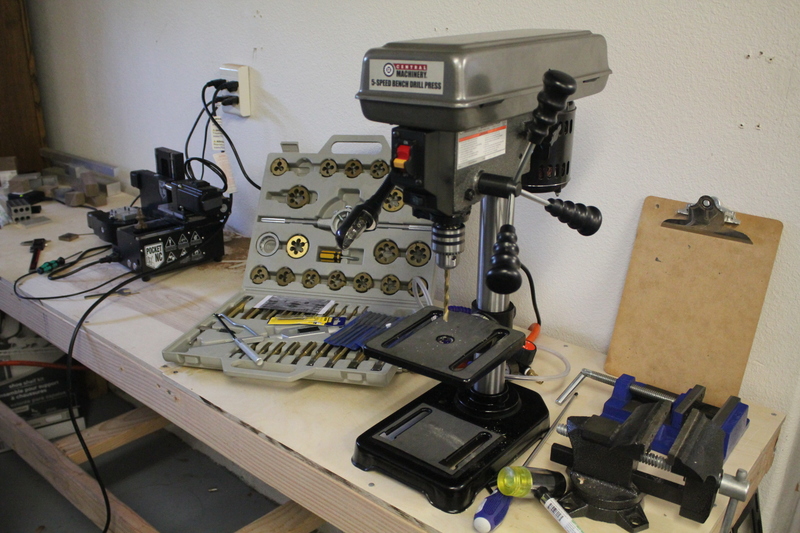 Before I make the new clamp system (see the previous post), I needed a drill press for getting holes in the bar stock to attach to the vice. I've wanted to get a drill press for some time as it's super handy to have around, and I had to do some unfavorable hand drill setups, which I won't go into as it would send shivers down your spine.

I looked at local for sale places like Facebook marketplace and craigslist but couldn't find any in my price range ($50-90). I only needed a pretty small tabletop one, so I looked at harbor fright, I was amazed to find they had one for under $60 and perfect for my worktable! It's got a 5-speed system with a 2" drilling height.

While I was there, I also decided to pick up some other tools. I ended up getting a set of small files for deburring, a small hack-saw, and a metric threading kit, which was on clearance as the box was open (only found one part missing) for $50!

I was planning on threading the base plate that I would be getting from Design The Everything to attach my new clamp system. After buying it, I found they didn't have the specific threading tool for the screw that I'd be using, so I went to ace hardware to pick it up. I kind of regret buying the whole threading kit as it has tools primarily for larger sizes I would rarely if ever use. 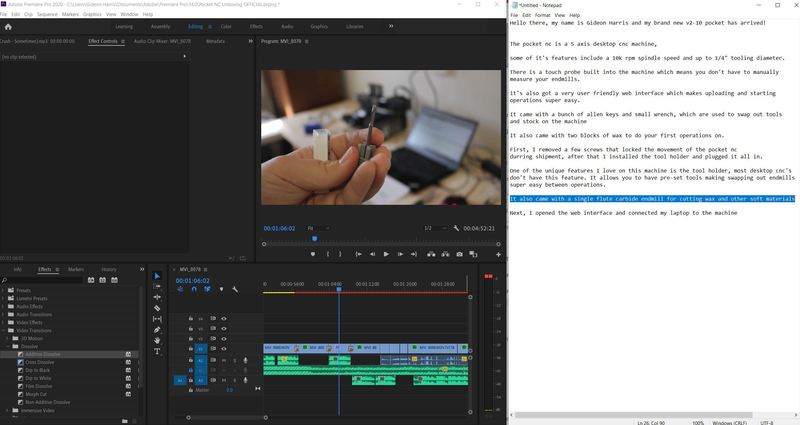