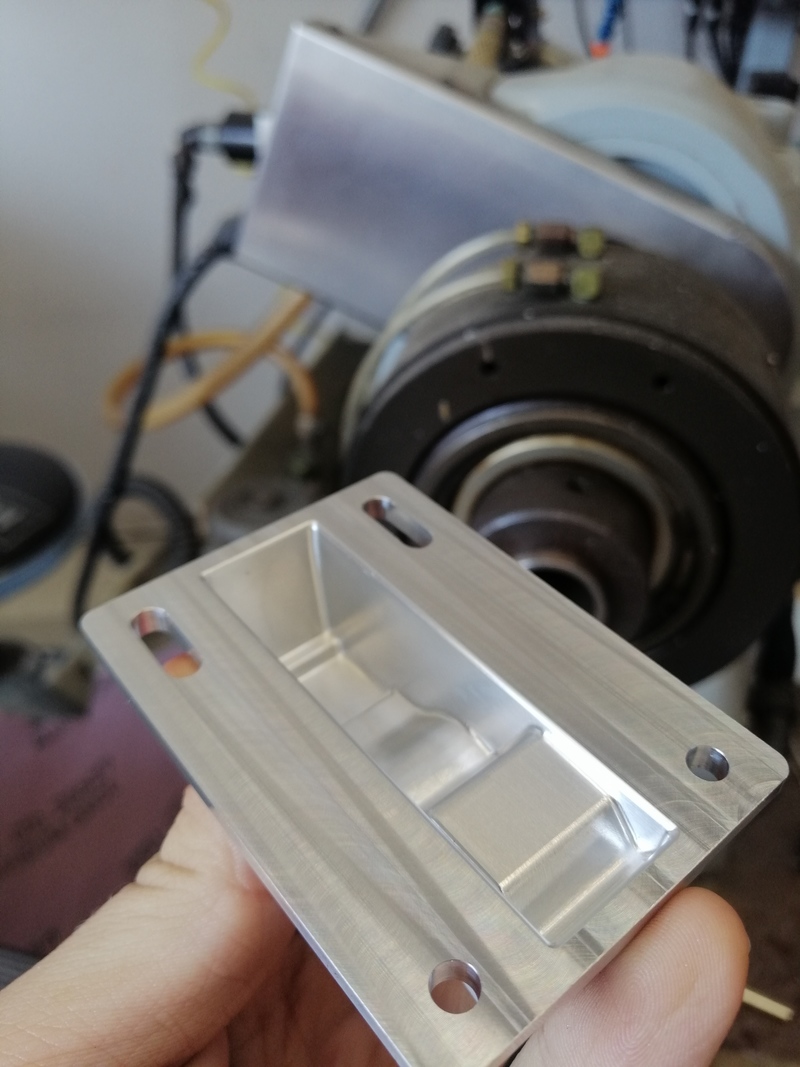 Running the second and third operations on these skateboard parts today!

I had some weird sound issues right out of the gate when roughing out the pocket on the second operation. Had a high pitch hollow sound each time it took a pass; as it turns out, one of the teeth broke off and was dragging along, pushing the aluminum instead of cutting it.

For the finishing passes, I copied over the same toolpath settings I used for the first op and got an excellent surface finish on the bottom and side faces; however, the corners weren't all that great; you could visibly see each stepover the tool took. I've never used the pencil toolpath before, but it seemed to look pretty good in the simulation and was precisely what I was looking for. The pencil follows along the corner intersection of the vertical and horizontal walls cleaning those edges up with a single flowing motion. I am honestly shocked by how good it turned out after I tried it. In the past, I would try and use the trace toolpath and manually draw geometry to have the tool follow along, but this one makes it so much easier.

I also had some difficulties when I put the part on the 4th axis fixture plate. There are two holes on this piece at weird angles, and instead of trying to make some elaborate fixture plates for them on the 3-axis mill, I decided to do it on the 4th axis. For some reason, the tool heights are weirdly and consistently off; I've got each of the tools set right (four inches from the top of the table, in centerline with the a-axis), but they all cut too high. I did deck the surface of the fixture plate to ensure it was at the right height, and I'm almost wondering if maybe I didn't set the endmill correctly on that, and so the plane I cut is lower than it should be. 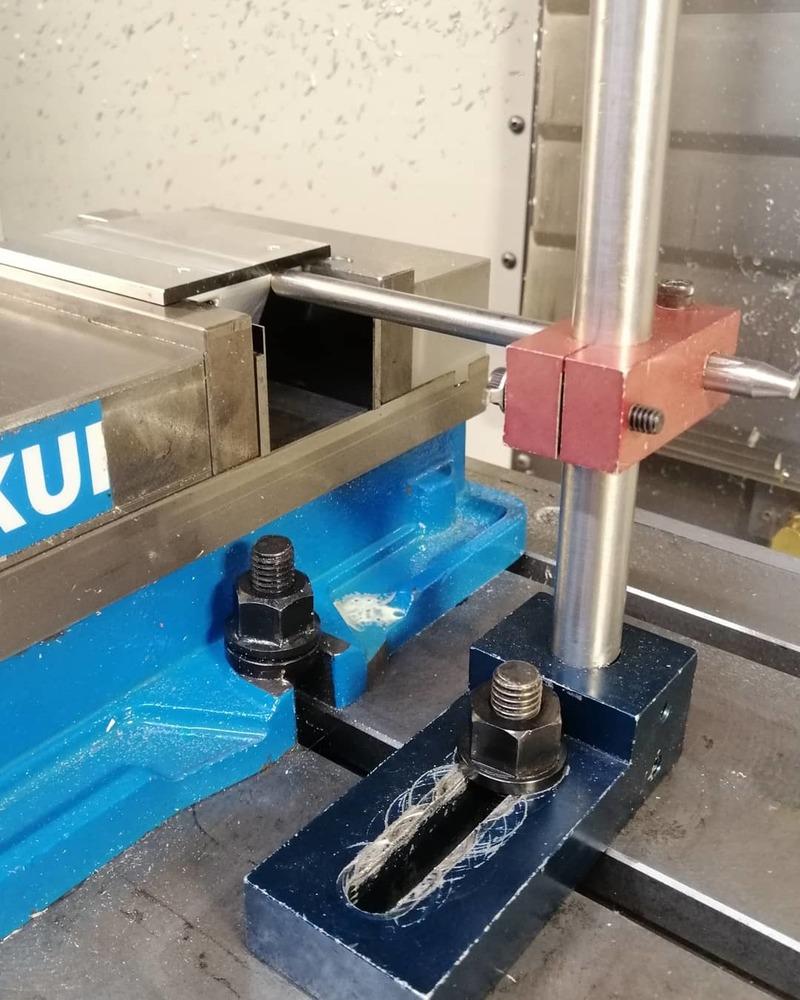 Working on the second operation for these skateboard parts and getting it all set up to run.

For the second op, I had an interesting setup with how I held the part in the vice because I only had access to thin parallels of the right height, I had to space them out from the walls of the jaws. If I had them flush up against them, the part wouldn't sit perfectly flat due to the slight radius on the edge of the flat.

Another issue I ran into was setting the tool height on the second set operation. Because the part is on parallels, I hand no "known" height in my CAM software because the face was uncut and so had an undefined distance between it and the flat of the part. The solution was first to deck the top surface of the part upsidedown, then measure the thickness of the remaining stock and offsetting the origin in Fusion360 to match the same height.

The last thing I need to do is find the origin, which is as simple as putting a gauge pin in the existing hole and sweeping it with a dial indicator. With the known height and origin, I set up a hard stop on one end of the part to allow for repeatability without having to sweep the pin on each swap out of parts.

I love how easy it is to set the work origin in fusion360, and using sketch geometry makes it easy to create quick boundaries and location points. 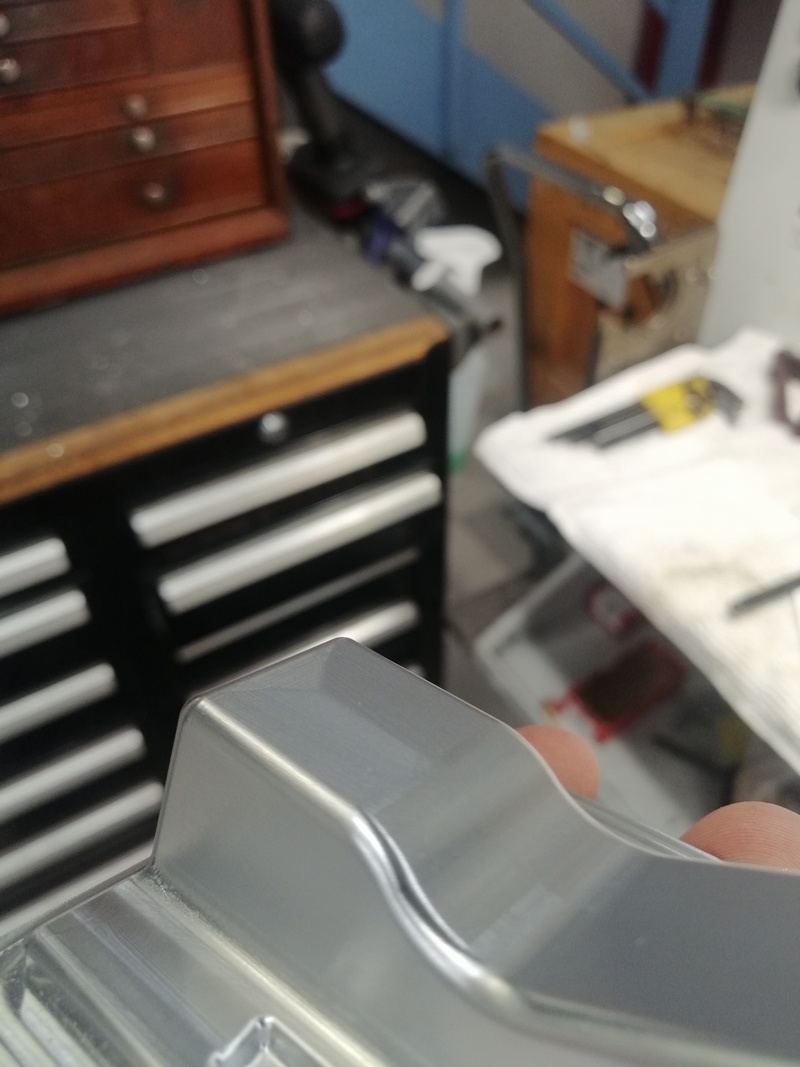 Working on the skateboard parts again, and decided to switch up the toolpaths a bit to get a better surface finish.

The primary issue I was dealing with yesterday was tool vibrations (see the previous post), which left small marks all over the part. The cause of this consisted of two factors that played nicely together.

The first was the tool stick out; due to the height of the piece, I had to have the ball endmill stick out over an inch from the edge of the collet; this makes the endmill not as stable, and change in axis (x&y) could cause the tool to deflect (jumping side to side).

The second is how much material I was cutting with the ball endmill; I had the part roughed out with a 1/2" square endmill and ten thou (0.01") stepdowns leaving eight thou on all sides to be removed at the final finishing passes; because of the amount of material that needed removing coupled with the long stick out caused a lot of vibrating and small marks on the part.

I decided to come in first with a 1/4" ball to clean up the steps from the 1/2" endmill and leave two thou (0.002") to clean up with the smaller ball cutter. For the tool stick out @tuesdayandthursday suggested I try a tapered ball endmill; this would give it much more rigidity when reaching down the tall walls on the sides of the part. Thankfully I found a ball endmill roughly the same size as the one I was using previously (so I could make a fair comparison) and tried it out. I got a significantly better finish, and I didn't hear any tool vibrations throughout the whole operation.

The only thing I am not super pleased with is where the tool changed directions on the machine, and the endmill dwelt for a fraction of a second, just enough to leave a slight mark. I haven't looked into it too much, but I'm pretty sure there is a feature to allow the tool to glide around corners instead of doing a hard turn. I tried playing around with the tolerance and smoothing tolerance settings in the passes tab but couldn't see any significant changes (used 0.00021" tolerance for both). 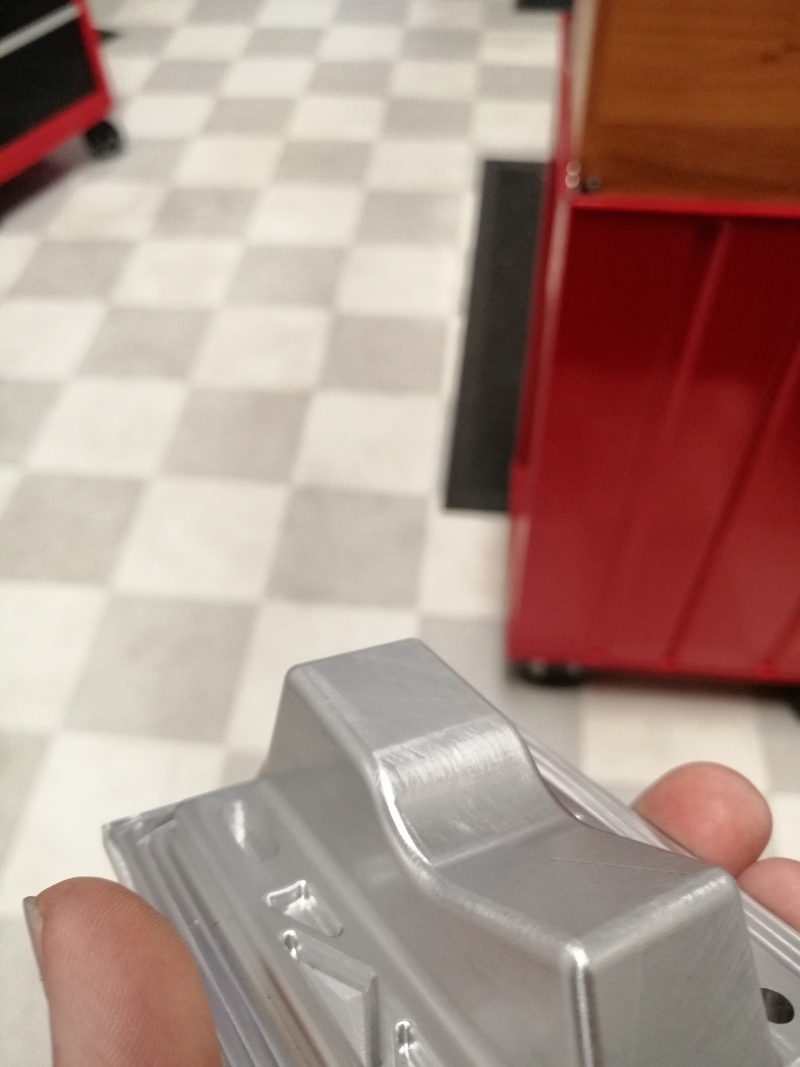 I am working on a set of skateboard parts today on the Haas VF2.

One of the difficulties I ran into pretty quick on the first part was how long I had to stick out a couple of the endmills I'm using. There is a large bump/cup shape on the top of the part that has a very organic body to it, which requires a slow spiral toolpath with a ball endmill to ensure it all flowed nicely together. Because of this, I had to use a smaller endmill then I usually would to get into all the crevices and would have to have it stick out over an inch to get all the shallow features. Unfortunately, this meant the tool would vibrate while cutting the aluminum and left some weird surface finishes. Thankfully these parts will be tumbled afterward, and that will remove all the marks left by the vibrations but isn't my best work, and I may switch the toolpath up for a morphed spiral to see if I can get a better finish.

There are also two slots at the bottom of the part I needed to mill out on the part which I tried to do on the first operation with a 1/8" endmill and 1.25" tool stick out, but the vibrations were so bad it left a horrible finish.

Since this is a skateboard part, the tolerance doesn't need to be super high, and the looks matter more than accuracy. It still is an exciting challenge to machine out all the small features and getting good finishes in a relatively short period. There are a few small pockets that require a 0.04" endmill to clean up, which requires quite a bit of the machining time.

This first part will consist of three operations, first and second will get the majority complete on the 3-axis mill, then it will be finished up on the 4th-axis to get a couple of small features that I'm not able to reach on the previous setups. 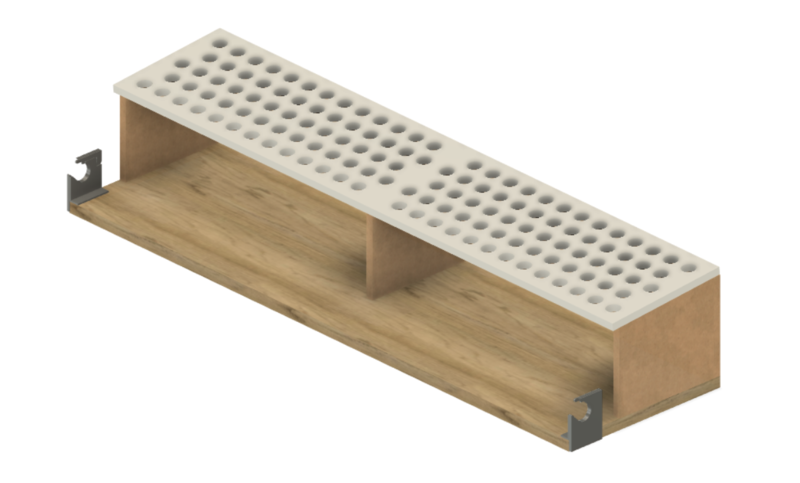 Designed the new tool setup and breakdown workstation today! I'm super excited to start using this and getting everything organized neatly, which will make finding tools much easier!

We've got over a hundred slots for tool holders to sit on the top allowing all the machines to be completely broken down and all the tools put away at any given time. In the past, we would have issues of not enough places to put all the holders and would have to leave the VF2 with the unused.

It's going to sit on three rolling toolboxes with a big butcher block to use as the tabletop. Underneath the tools I left big open areas for tooldrawers to sit which will hold all the drill bits and reamers. Then on either end, there will be the tool-holder holders to take apart and set up the endmills for the machines. In the past, they would be set up on the mills themselves, which is handy for quick changes but doesn't make sense to go back and forth through the shop to pick up endmills and drill bits.

After the design was all finished I took advantage of the drawing section of Fusion360 and drew up some quick plans for the workstation, then printed it out and my boss sent it off to the shop next door to get it built.