My desk is almost always messy and cluttered, no matter how many times I clean it, it always seems to get back to its former state. I used a wooden box to raise my monitors so I wouldn't have to look down and strain my neck over time.

Was there an existing product, and is it easier or cheaper to buy that?: I have looked into purchasing wall mounts in the past; however, they were $30 each. Buying wall mounts might not seem like a lot for a one-time thing, but if I ever needed more, then that would add up fast. Currently, I have two monitors, and that alone would mean $60 just for wall mounts. I don't think so. Designing and making one would be cheaper. Maybe not in labor spent, but it would also increase my knowledge of how to use Fusion360 (an engineering software) and give me something to add to my future portfolio.
Design:
Starting the plan, I had first to figure out if it was even possible to mount them without going through a lot of trouble. I took my monitors off their current stand and looked at how they were attached. There was a plate that slides in under the monitor and holds it up from the center base of the monitor. Finding this out, I then started designing a piece that would match the one on the stand to hold it upright.
I was initially thinking of designing it as a solid one-piece mount not able to be moved or rotated. I quickly realized I could have the rotational ability from a GoPro design. How it works is the GoPro has two arms that have a hole going through them, and they would slide in the middle of 3 other divisions, and a screw would go through those, and when you tighten the pin, you will tighten the hold which would then decrease movability. 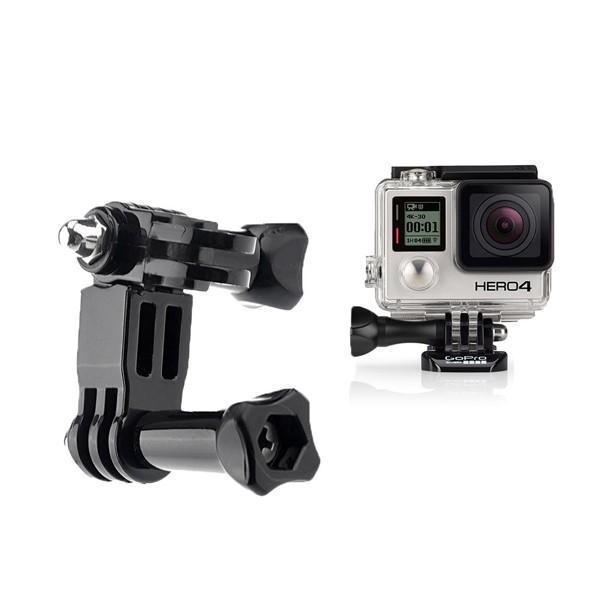 I was kind of afraid that the PLS plastic would not be strong enough to hold the monitors up before looking to see how they attached to the stands. But since the holder sits inside of the monitor, all the weight would be pushed down which would, in turn, forced onto the supports which would make the weight of the monitor's relay onto the studs in the wall.
First Product:
After designing a replica of the mount from the stand; I implemented the rotation as mentioned earlier design and added three arms to be held by the central wall mount. After printing this, I started work on the second piece; the holder for it, that would attach to the wall. The second part was much simpler to design as I didn't have to be nearly as precise as when creating the first part that slides into the monitor. Something I realized later was to angle the bottom of the second piece to face inwards for both monitors, so I have a bit better of a flow of the two monitors together. 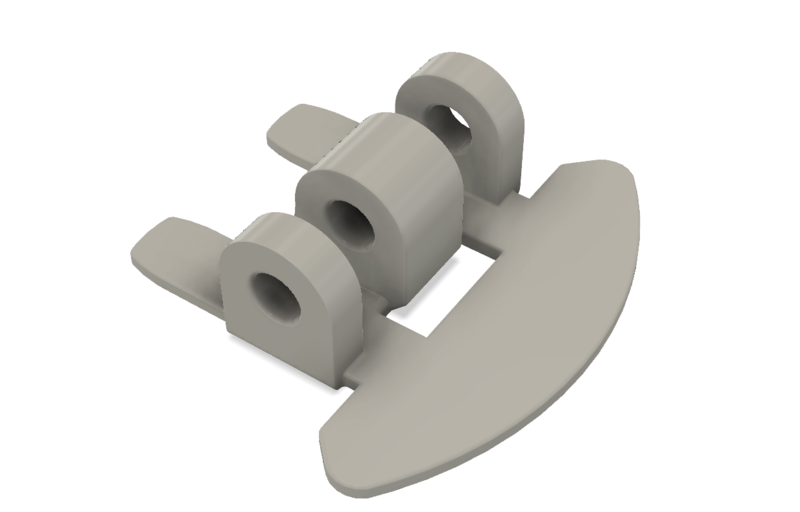 Note: The two arms at the top left face up into the monitor, and the plate on the right supports it from falling forward.
Second piece: 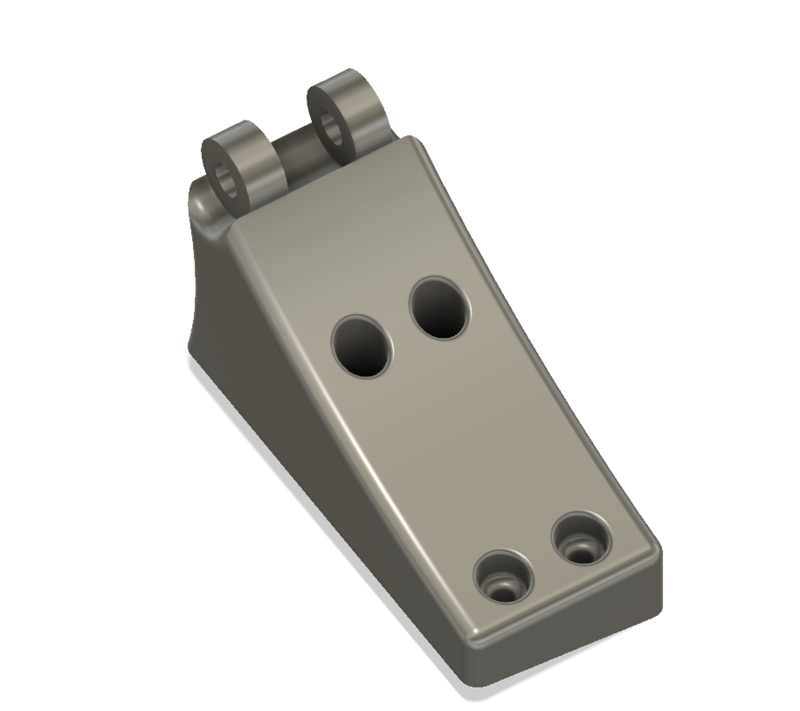 Fails and attempts:
After 3D printing both parts, I had to do some sanding to get them to fit. After getting everything all snug, I slid the screw through and tightened it at the other end with a wingnut. Then tested to see if it would fit in the monitor no problem; it worked beautifully. I then attached a piece of wood from an old pallet and screwed that into the wall studs for support. I then attached the wall mount adapter to the wood and rested the monitor on top. Everything held, on the first try!
I then started the next print for the other monitor and left it overnight to print. Well, here's where I made my first mistake. 3D printing prints in layers upward, well I printed both of them flat, the reason this was a mistake is because of the layer lines, this makes a weakness, and it doesn't take a lot of stress for it to snap along a single layer. And because everything was printed from the bottom up, that meant that the part that attaches the two had vertical layer lines when on the wall. These horizontal layers suggest that if you applied enough pressure, it would break.
I didn't find this out until after I installed the other monitor and was trying to get the wires to go to the side that it all came crashing down. Thankfully I was there to catch it, so neither monitor got damaged. I was wracking my brain, trying to figure out a solution. I could print it on its side, and it would be much more stable; yes, it would be more sturdy overall. However, this wouldn't fix the overall problem of having such a small point where the pressure of the monitors would be pressing on all day long where any slight movement of the monitor would make it slightly weaker. And, over time, this would break.
I had to think up a whole new design and way of attaching it to the wall. I wouldn't be able to use my previous model as that would not hold. I then took apart the monitor stands that I had initially and realized I could take them all the way down to the adapter that sits inside of the mounts, which means that all I had to do was design a piece that would house the adapter and attach it the same way that the stand had. This new model took me 30 minutes to create and then an hour to print. 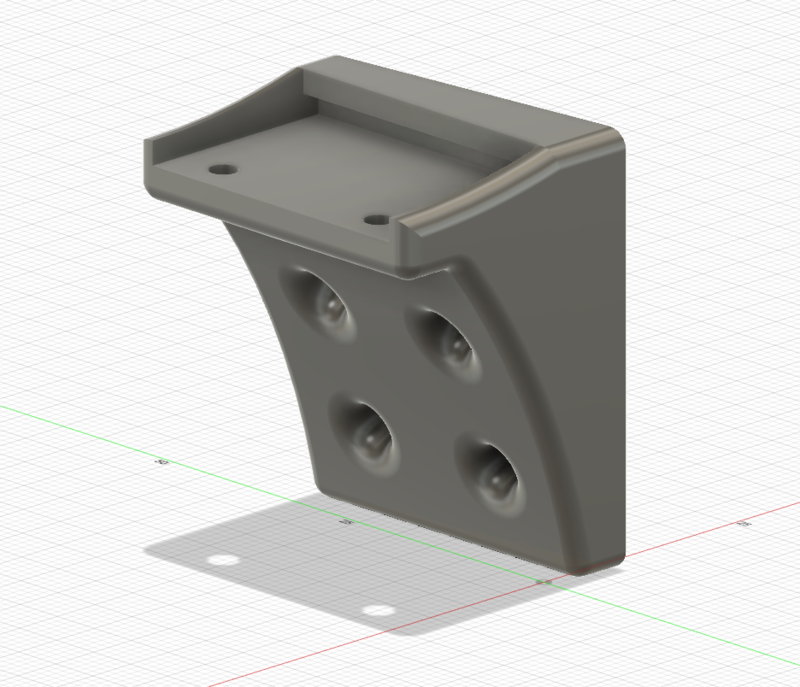 Final Outcome:
After screwing in the monitor adapter onto my new wall mount, I tested to make sure everything snapped in when attached to the monitor. Everything worked perfectly without any issues whatsoever. I mounted my monitors and was able to rotate them up and down to get the perfect viewing angle. Because of the wall attached monitors, it cleared up quite a bit of space on my table for new projects and overall cleanliness.
Here is a photo of my new and improved workspace: 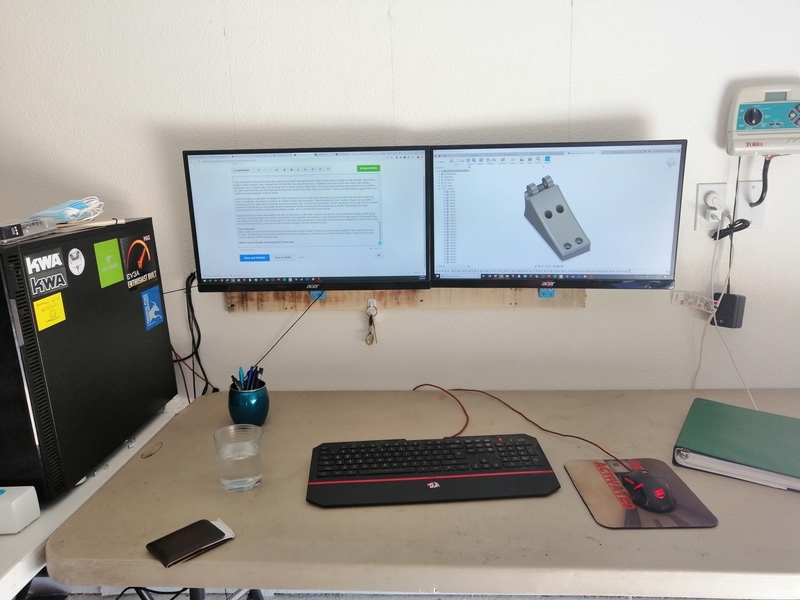 What I would have done differently knowing what I know now.
I didn't think of angeling the wall mounts slightly to make screen viewing easier on the eyes, which is why one of my monitors is vertical with the wall while the other is at an angle.
I would've added a bit more support to the new design by increasing the height of them, for the longevity of wall adapters.