I started a project a couple of weeks ago to build a tracer unit for my airsoft rifle.

Without going deep into it, a tracer unit is a small unit that attaches to the end of your barrel that lights up whenever a bb passes through it. These bb's are not any bbs but glow in the dark ones. Glowing in the dark bb's is mostly useful for dark rooms and helps to see what you are firing at without using a flashlight that would give away your position.

The issue with buying them was, plain and simple, the price. For a half-decent tracer unit, it will run you upwards of $75. I was not about to pay that for such a small improvement.

That's where I started to think up a design for my tracer unit. I began by acquiring a pack of ultraviolet LEDs from amazon and used that as a base to start 3D modeling. I was initially going to have it 5" long, and seven sets of LEDs, two per set. After modeling a quick prototype, I printed it and tested by tossing a bb through. It lit up as it passed through, and stayed lit for 3-5 seconds.

Then, looking to improve and give it an overall smaller profile, I lowered the sets of LEDs to 3 instead of the 7. Using 6 LEDs, I dropped a glow-in-the-dark bb, and it lit for several seconds after it passed through.

Next, I had to figure out how to wire everything and keep it all small and concise. I at first looked into fitting a AAA battery inside of it somehow but abandoned that as it would require 3.4v to give it the proper illumination, and AAA's only gave 1.5v. Then I started looking into wiring it to the gun itself. I wouldn't need to take it off very often, and I have a mock peq box on the front of my rifle that I could use to house the battery. From there, I designed two holes in which I could feed the + and - wires through. From there I would have them each run down a side of the tracer unit, and each of the LED wires would be soldered to their corresponding side.

After figuring the wiring setup, I went back to the battery. I had an issue; I wanted to use AAA batteries as they were small enough to fit inside the peq box and could hold enough charge to last a while. After doing a bit of researching, I found that if you put connect batteries, you can increase the voltage, essentially adding 1.5v every cell I attached. From there I soldered three batteries end to end, positive to negative as a pack using metal plates I manufactured out of some scrap conductive metal. After spending an hour or two trying to figure out why it wasn't giving the proper voltage (1.5v with three batteries instead of 4.5), I figured out that I wired it wrong. I had soldered the plates properly, just connected the wires to the wrong sides. I fixed that, and it gave the propper voltage output (around 4.2v).

I decided against going through the headache of trying to figure out how to use light sensors to detect when a bb passes through the tracer unit. It seemed like a lot of work for not a lot of gain, maybe a for a future project. I had also bought a pack of on-off switches, I wired the battery up to it, and everything worked like it should and lit up properly.

Then I put it on my gun... and well, it didn't work as it should. The bbs barely held any of its charges and died very shortly after firing. Maybe half a second after it left the barrel it died. It was very disappointing; the LEDs illumination was at its max output. Anyway long story short, those LED's weren't going to work. And this is where the project halted; I could order new, larger LEDs, which I would imagine would fix the issue. Until then, this is a failed project. 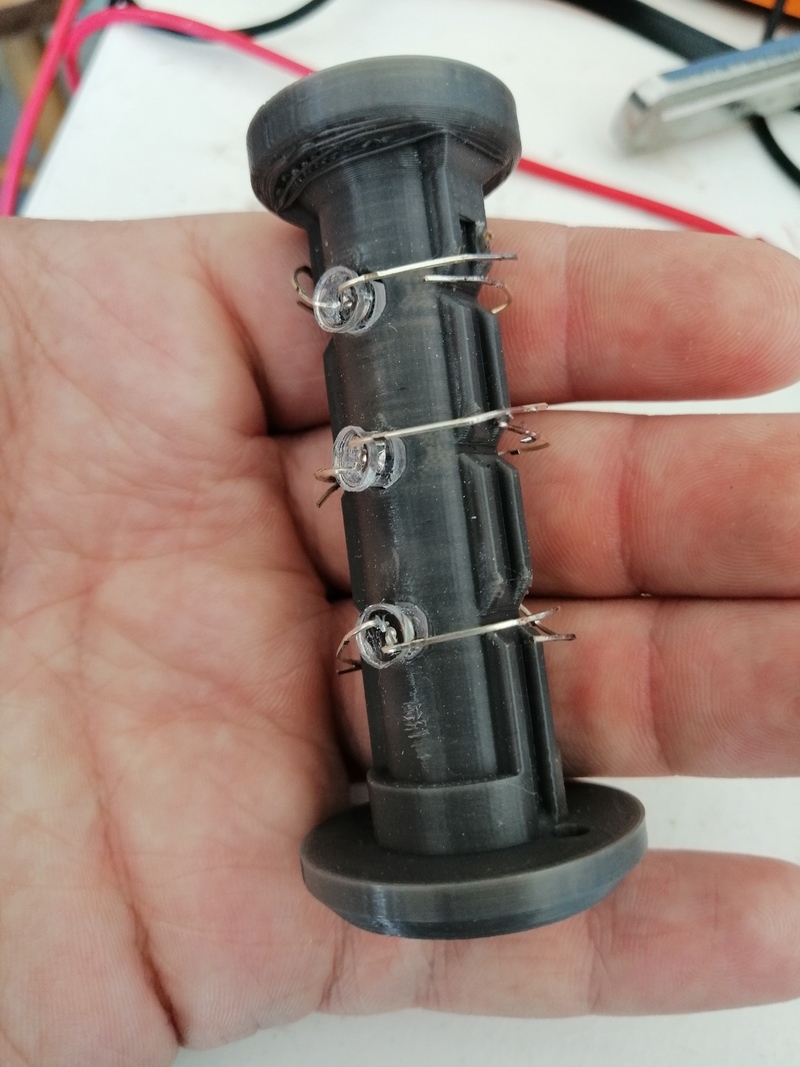