What is a carbine kit, and why is it useful?

In airsoft, and with real guns, there is a thing called a carbine kit which pretty much converts a handgun/pistol into a full carbine. The primary purpose of this is to have more stability and the option of optics as a secondary. Here is a photo of a Glock Carbine Kit designed for a 9mm handgun.

Was there an existing product, and is it worth buying?

There have been carbine kits made for quite a few different model handguns, except the ASG CZ-P09. This particular gun is ubiquitous in the airsoft world and performs exceptionally well for its price. There have been several individuals that have made their P09 carbine kit but none on the market. Carbine kits, in general, are not very popular. The reason being is that if you want a full carbine, you will buy one. And if you want a handgun, you'd just run with the gun, which means that demand, in general, is not very high.

After asking around on a few different sites to see if people would be interested in purchasing a carbine conversion kit for the CZ P09, it looks like there is a small market for them.

I started by looking at different existing carbine kits via google and looking at how other carbine kits had been designed and standard features. Initially, I was not going to add an extra mag holder as it seemed like a lot of work for something that wouldn't be very useful, but after watching reviews of them, I found that it would be worth modeling.

After a bit of digging, I found a design I liked, the SRU Carbine Conversion Kit for the Glock17 and like models. I loved this particular carbine kit for its small body and compact look about it. The carbine kit would attach to the underside of the rail on the P09. There would be an inverted rail as apart of the carbine kit body and once the gun is in you would screw a nut upwards to fasten the P09 to the carbine kit securely. The folding stock idea came from an old Airsoft AK47. It had a folding stock that locks into place using a spring and ledge to keep it from folding to the side when in use.

I started the design process by importing a 3D model of the P09 to use as a base and design around. In addition to the 3D model of the P09, I was able to get my hands on one as well to get more precise measurements. I knew from the outset that I wanted a mag holder and folding stock to set it aside from your typical carbine kit. I also knew that I wanted to have a two-tone one to make it stand out, and it would help with breaking the design up for ease of printing.

After a few hours of modeling and finding all the constraints, I fell upon a design I liked and printed a piece of it to test the size on the gun. It 3D printed beautifully and attached correctly to the underside of the rail on the P09 itself. I only printed the front rail portion that attaches to the gun rather than 3D Printing the entire model.

Before getting my hands on the actual P09 gun, I used the model I found online as a base and just modified it afterward to get more precise measurements. Starting without the P09 in hand gave me issues down the line, I wanted to make sure I had plenty of wiggle room in case the P09 3D model was off. It was a mistake to design this way because it meant that everything was more substantial than what was strictly necessary and would require a lot more work to prevent the final product from having a lot of bulk to it. The folding stock turned out very well for a first attempt and needed hardly any modifications to bring it up to excellent working order.

Below is a video of the folding stock, prototype:

After getting the base design finished, I started cleaning and making sure everything had a snug fit; this took longer than expected simply because each print was 8+ hours per part at the lowest quality settings.

The original design for the mag holder was

After fixing the small issues with the model I ran into, I was ready to start printing in higher quality. Up to this point, I've been using PLA plastic for its quality for the price. I wanted the carbine kit to stand up to a lot of heat and stress, so I started looking at other filaments. The one that caught my eye was nylon. Nylon is expensive but very strong and produces excellent quality prints and is easy to clean up with sandpaper; the major downside is its price. Nearly four times more costly than PLA and harder to make clean prints. It requires higher temperatures to melt and needs a controlled environment to work correctly. Overall a headache to work with if you haven't printed with it before, which was my case. I decided to go back to PLA after doing more research on how to 3D print with nylon. I looked at ABS as well but decided against it as it did not create the same kind of quality as PLA, plus was more expensive and weaker.

The final 3D print came out very well. I printed each piece on its side for more support but would not do that again as it created imperfect faces. There were 11 separate pieces to print. The biggest pieces3 took 12-25 hours to print, and the smaller ones took 5-12 hours, in total about 70 hours printing time. It turned out very well, clean, and durable. There were a few imperfections on the print but nothing I couldn't clean up. I designed it so each piece could fit into each other, which would then get epoxied together. I used plastic bonder epoxy; it fuses two faces.

I decided upon a grey front end to match the wolf grey P09 for someone that wanted a copy. The stock is attached to a buffer tube which gets screwed into the 3D printed stock adapter. I used a buffer tube so that I could use a telescoping stock and have more freedom with what I wanted on it. 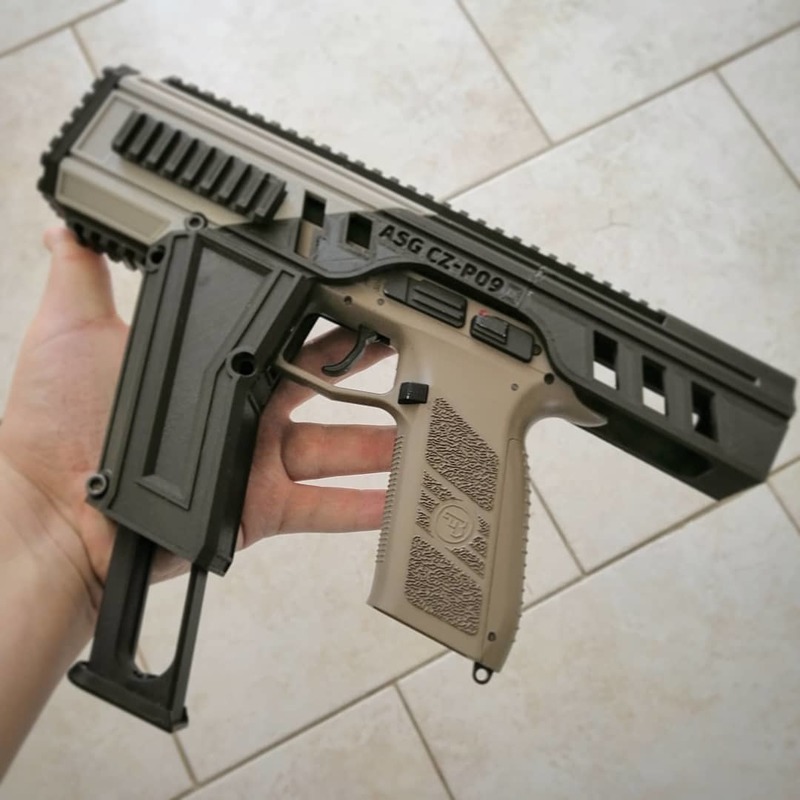 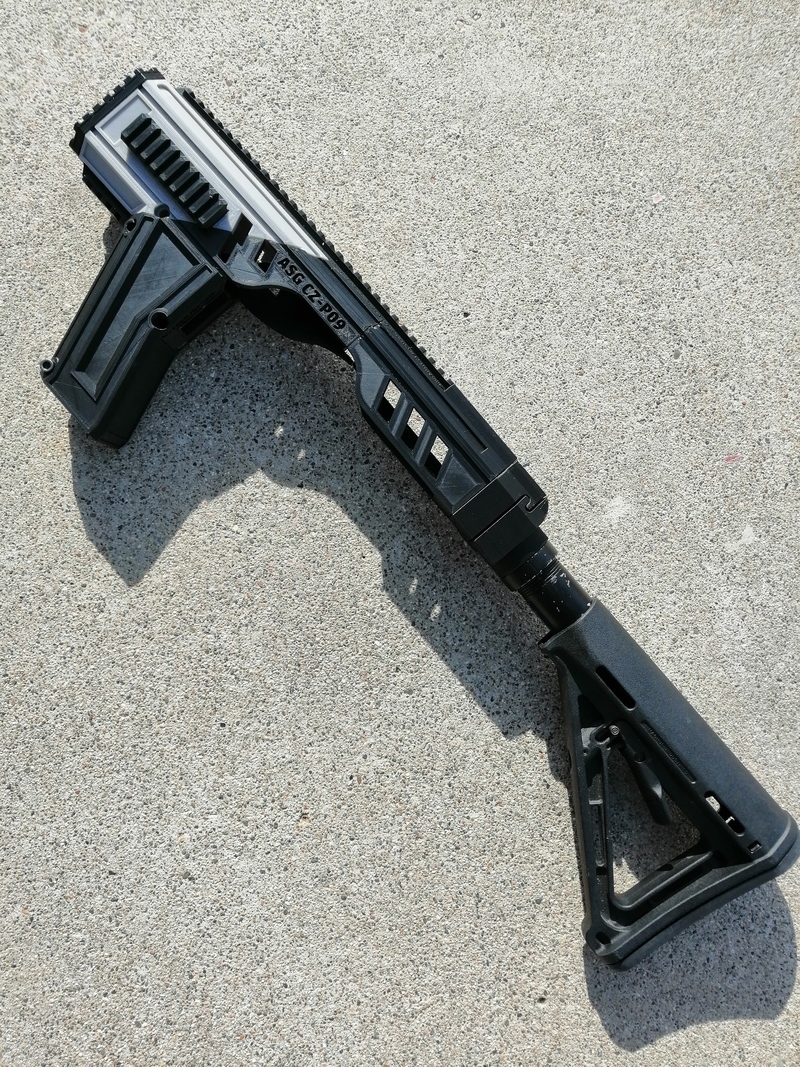 Overall there isn't a lot I would change. The biggest would be making the mag holder smaller and more compact, also making the thickness of the parts from 8mm to 4-6mm.