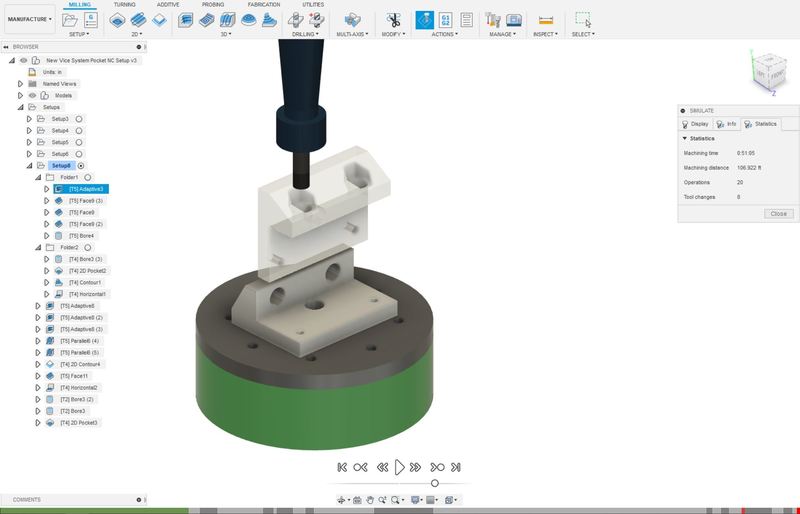 I've spent the past few hours generating toolpaths to machine out the clamp piece to use as templates for future projects.

I had no idea until I started trying to optimize the operations of how much time I wasted. I would typically use 3D adaptive clearing as my coverall for machining, including finishing passes. I would usually use the rest machining to prevent re-cutting material, which worked, but if I made any edit to the previous toolpaths, it would give an error to all the rest.

I'm nearly finished and have a bunch of toolpaths each for a different purpose (as seen above). I would watch a few tips and tricks video's from @saunders then use some of the information I got to imbed into the programming. It's been super helpful, and I cut the overall machine time from 3-4 hours to 57 minutes! I'm still working on optimizing the order in which I do things and splitting things up to get the most accurate part.

One of the tricks I found interesting where for the finishing passes. Instead of doing one operation to clean the bottom and side faces, you would split them in two. I would generally do this, but the thing I didn't think about was not letting the endmill doing the floor touch the side faces; this will prevent the side of the bit from rubbing against the side face and leaving a poor finish. The way you do this is by adding roughly one to two thou on the radial stock to leave.

Now that I am taking my time and making the best toolpaths, I'm looking at the simulation, and it had helped tremendously with removing wasted time and preventing mistakes like tools plunging into stock. These new toolpaths do require a lot more tool changing (6 times, I think), but I think it will be worth it for the outcome and speed it will bring. I've also separated each group by the endmill, so I need only export for each tool.

I'm super pleased with what I've come up with so far and need to order a few 1/4" endmills to fit my new collet and toolpaths.