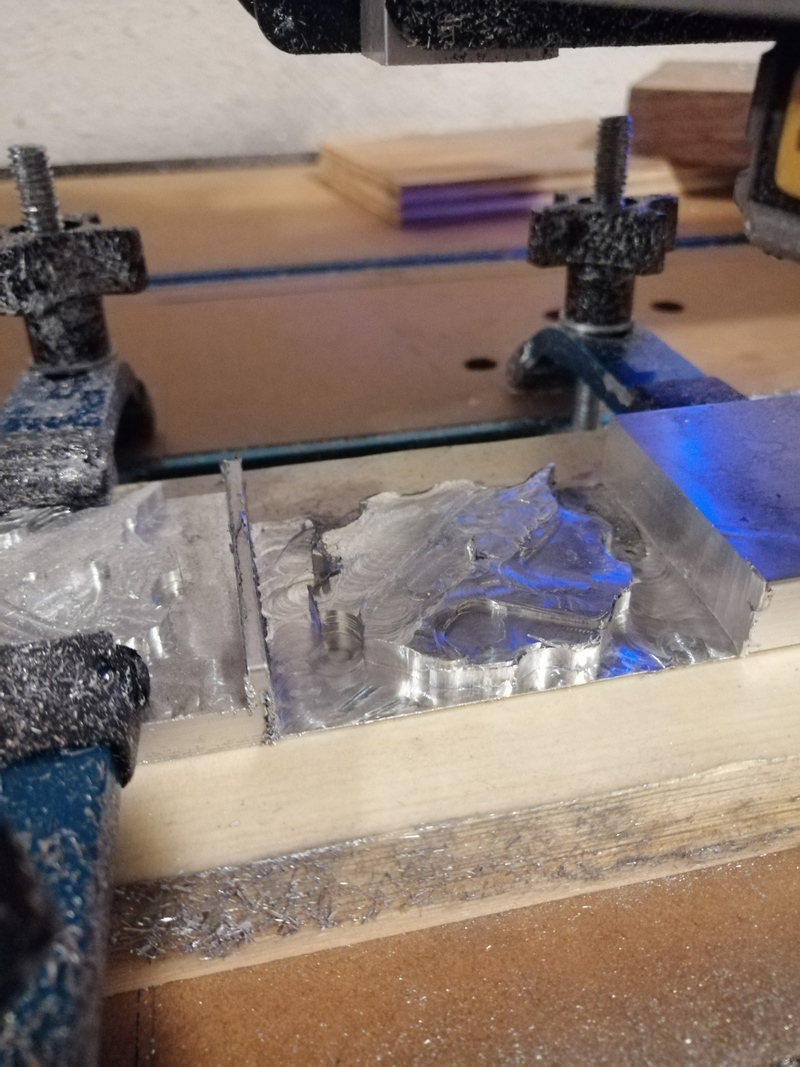 Over the past few days, since I did the first aluminum cut, I've been researching the most efficient ways to cut aluminum with a clean finish.I found that the vertical cutting height should be much higher than my previous 0.2mm. This time I set it at 6mm cut depth and place it at 0.1mm optimal load; the sound wasn't quite like I would have liked, so I tweaked it a bit and got to sound a bit better.

I also found that using compressed air helps with chip removal; I already knew this, but I found with a combo of compressed air, and the silicone gets a clean-cut, and you can see what's going on.

I was able to cut down the stock to about 5mm and then start cutting out the logo design that I modeled a few weeks back. It all went very smoothly without any hitch, though I did have to be there as I didn't trust it on its own.

I started with a 1/4" 4 flute carbide bit to mill out the smaller stock, then switched over to a 1/8" 4 flute carbide bit to clear out the shallower areas and to do the final touches.
The significant difference between this cut and the previous cut operations I did the other day of the same model as I didn't understand how to set the Rest Machining option; this means the rest of the stock to cut from the previous operations.

I tried something new here as well, which was taping the underside of the stock and the board and glued the two sides together for a more secure fit. I did this primarily because I knew I wanted to cut the part out of stock, and I didn't want it loose.
I noticed that toward the end, one side of the stock was higher than the other and so I started cutting into the tape before its final pass, which was not ideal.

Since I had to be there watching and blasting it with air, it was not ideal. I've got an idea to add a few nozzles which I can attach to the air compressor so I can let it run on its own.

So the bits I got from my brother (see earlier post) were for cutting steel and titanium, which, as it happens, is not ideal for cutting aluminum. I thought it would be just using a harder bit than necessary but would work just as well, but not.