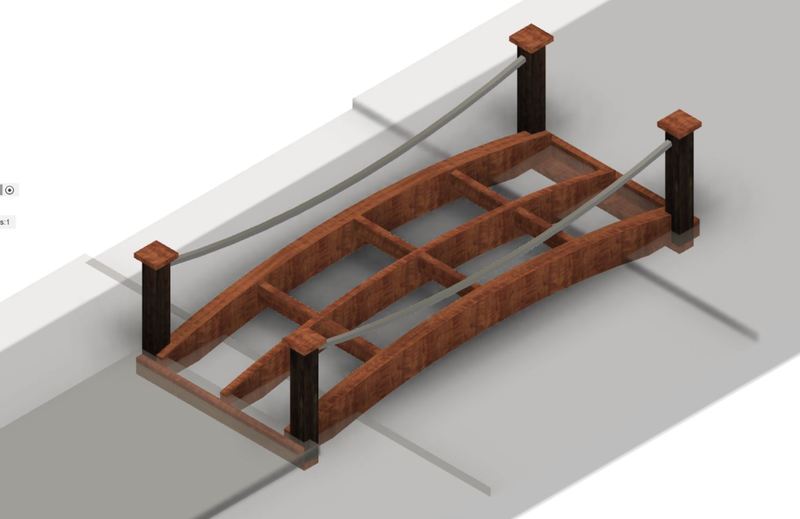 Since the Coronavirus left many people at home with not a lot to do, many people have been doing home improvement projects; and so some friends down south are doing the same.

One of the things they wanted to add to their property was a small wooden footbridge over a small dry creekbed; and asked if I would be willing to design something up in Fusion360. The creek was approximately 6ft across, and they wanted the bridge to span a bit longer to have it fit better with the surrounding. The width of the footbridge was to be 3ft wide with an arced.

@josiah and I spent a bit of time looking online at designs to figure out exactly what would look best and how to build it. After coming up with a couple of different designs, we settled upon one that would have four 4"x4" posts in the corners of the bridge with long structural beams that go across the creek.

The main issue we ran into pretty quickly was how do we get a curve on the supporting boards. I did a quick google search to find out what other people have done and found an informational video tutorial. They used conduit (plastic tubing) and attached the two bottom corners of it to a 2"x12"x96" piece of wood, then the middle was screwed into the center top of the board; you would then trace the curve and cut it with a circular or jigsaw. To ensure you had consistent curves, you would then take that board and trace it onto others.

For the top planks, we found some 1"x6"x48" lumber at home depot that would work great for this. Since the bridge has an arc in it I figured we would space the boards out by 1/8" to make it look as if the gaps were planned and not since we don't have the tools to get chamfered edges.

Since neither of us had all that much experience, we wanted to keep the design relatively simple and straightforward, so we spent extra time figuring out exactly how it would all fit together. Which is why we are going to use a chain as the guardrail, it wouldn't provide any actual support if you were to fall but more for aesthetics.

I completely forgot that the wood we would be using isn't its actual size like 2"x4" boards are actually 1.5"x3.5", so I spent another couple hours making changes to the design to accommodate for that so we wouldn't run into issues when building it.

I then took the design into the drawing section of Fusion360 and deconstructed it and took the board shapes and figured out the quantity we would need of each one as well as how much stock we should buy for the project. I'll be going down this weekend to work on it and will post an update after.